It’s honestly so like me to make my grand return to blogging only to… disappear for a month. I can say, though, that it wasn’t just me being a lazy bitch. There may be a few moments here or there where it was just being a lazy bitch but for the most part, I have just been tremendously busy in real life. I know, so terrible, right? Actually, right now it’s not too terrible at all. I can’t complain.

I really need to catch up. I have over fifteen outfits I have saved that I need to blog and no time to do so. I need to stop making new ones until I blog them but I change just about daily. It’s my routine. New day in Second Life, new outfit for the day. Being versatile in my attire is a part of my love of both Second Life and Role Playing within Gor. The Gorean guidelines help me have boundaries for my clothing as well as drives me in my searches for things useable and within all that, there is a feeling of artistic expression. I adore it.

I am amazingly tired even though I’ve been sleeping thoroughly the passed few days. But hey, this is what happens when you’re having a struggle with anemia that’s worse than normal! Still, that doesn’t stop me from putting my outfits together and posting them. Honestly, it’s so much simpler to blog the outfit you wore *yesterday* and *today* because I don’t have to sit around and rush myself to have an outfit, I already did. Better blogger Verinne, here we come! Now I just need to start doing reviews again and I’ll be good. Speaking of, I need a public opinion on if I should move the Gorean portion of this to a separate, Gorean only blog. I think it might be a good idea to separate them as Gor is becoming a large part of my day to day in SL and I feel it would allow me to reach out more as the Gorean blog could be syndicated to the regular feeds as well as the *Gorean only* feed, which I feel that currently, since it isn’t a Gor only blog, I would not want to syndicate it in to. Whatever, feedback would be appreciated!

Anyways, I’m wearing pants! Well, they’re ragged shorts with socks underneath. In Swordsman of Gor, which Elle over @ Elle’s World most graciously reminded everyone of, it was said that during the winter times, slave girls are indeed allowed to wear pants. Obviously, it’s a bit more detailed then that and she has the quotes within her blog. So, even though my Jarl obviously prefers when I show off my booty, he was at least alright I had a nip slip going on. Got to have some flesh out in the open here.

The hardest thing I’ve found already with this is having enough fucking additions. I don’t ever seem to have enough scarves or ACCESSORIES as I had mention yesterday. I really wish I knew more places to pick them up. I scour all over the Gor sims, inspect the shit out of people at the Gor hub (Which seems like other people do to me *cough*) but half the time there just doesn’t seem like there are any new places for me to go. I know, there are actually a lot of things I want for Gor and have yet to buy. Stores like ViGo, Savage Garden, Knickknack and an even larger list of others are all on my list to buy from but I have to be patient . Can’t throw all my money all over the place all the time! 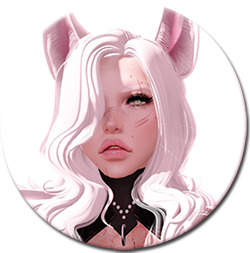